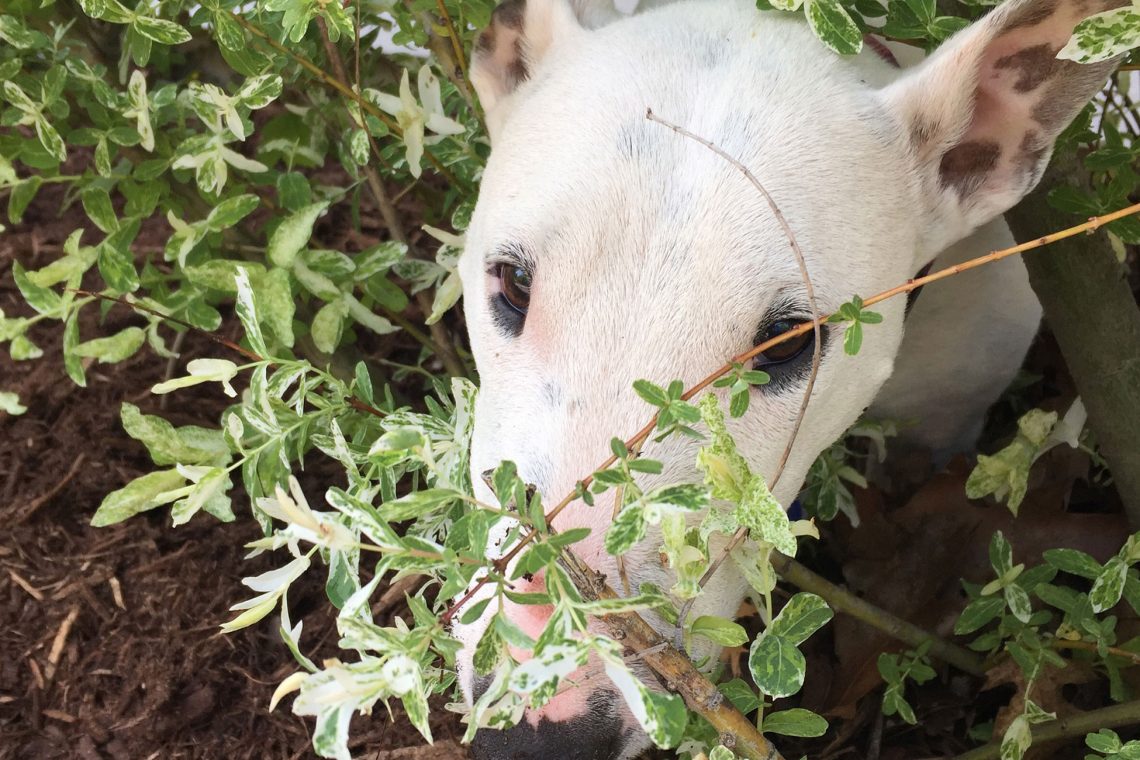 The day started at 4:00 am when Sally’s cold nose sniffed my eyelid. It was an interesting, if not terrifying way to be startled from sleep. I lifted the blanket, thinking she just wanted to snuggle, but instead she sat on my arm. Now I was fully awake and realized I had forgotten to give her the doggy Xanax she needs to sleep through the night. She (we) would not be going back to sleep without it, so we got up. After a trip outside to pee (her, not me), her meds, a trip to the bathroom (me, not her), we snuggled back into the blankets and slept for another four hours.

After breakfast, a few errands on my part, and another nap on hers, we all (Mike, Eli, Sally and I) headed outside. It was sunny, warming up, and there were flowers to be planted (my job), mulch to be spread (Mike’s job), chipmunks to terrify (Eli’s job), and a new paddle boat to obsess over (Sally’s job). Wait! What? Yup! Sally found a new obsession.

We were given the paddle boat earlier in the week by our friends, Joe and Michelle. I was ecstatic as I had wanted to paddle around in our pond since we moved in. Mike was not as excited because he had been putting me off since we moved in. I wasn’t worried because when I’m happy, Mike’s happy and I was really happy. Sally was intrigued, but not that interested when the boat was placed on the grass near the dock. She had sniffed it, but then lost interest until Saturday morning.

She was doing her usual running and happy rolling (not the kind that involves a dead or disgusting thing), but stopped when she got close to the boat. She lowered her nose to the ground and followed it to the water craft. She started running around it, poking her nose into every crevice that met the ground, and trying to get underneath. Our guess was that a tiny (now terrified) mouse had run under it when the large white beast arrived. The obsession had begun. For the next three (yes, I said three) hours Sally did not leave the boat. She barked at it, searched every inch of it, and once in a while she sat and looked at it. She even got Eli involved, but he gave up after a few minutes. Sally didn’t leave for 180 minutes (give or take a few minutes).

After that she also gave up on the mouse (who was probably long gone) and spent a bit of time exploring the newly mulched gardens, relaxing in the shade of a Maple tree, scratching her back by wiggling in the grass, and looking for toads to lick (lucky for the toads, she didn’t find any). She did find a shovel Mike was using and dragged it back and forth across the yard. She would pause, drop it on the ground, then grab it and take off again.

I was planting annuals in the upper garden when she wandered up and found me. She expressed her desire to help by sitting on one of the newly planted flowers. As I continued my work, she followed me around, albeit her enthusiasm for the beautiful sunny day was waning and her steps were slower. At one point, I bent to kiss her head and noticed she had rubbed her nose raw on the boat in her quest for the mouse.

My energy was waning too, and getting up from my squatted position while planting was taking longer, but I was determined to take my boat out in the water that day. Mike and I pushed it into the water and I climbed aboard. Sally and Eli had zero desire to go with me, so I started pedaling. It was as much fun as I imagined and as I looked around, I saw Sally running around the pond following me. Of course I smiled—most things involving Sally make me smile. After a short spin, I headed back to the dock.

Our day of outside activities was done and we all went inside. Mike headed for the shower, Eli dropped onto the pillow in the living room, and Sally and I collapsed onto our chair. It wasn’t long before the melody of doggy snoring filled the room, and I was lulled into a short nap.

The dogs sprang to life when they heard Mike filling their food bowls and I wandered to the shower. After a few minutes, Sally walked in, stood on the rug and stared at me for my entire shower. Seriously, it was unnerving—even if it was just Sally. She wanted me to sit somewhere so she could sleep in my lap. As I snuggled into the blankets with her later that night, I ran through the events of the day and held her a little closer. My little 12-year-old, cancer riddled, partially deaf Sally had thorougly enjoyed her day and right then, that was all that mattered.