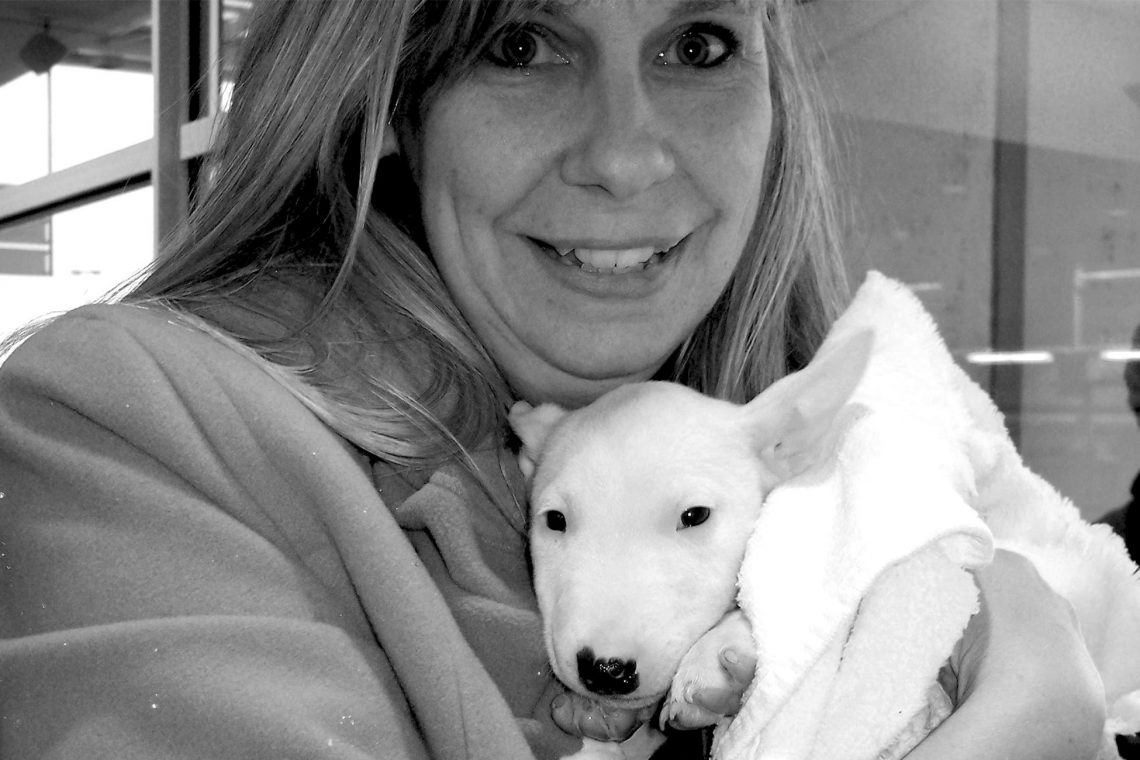 Flight 5689 lands with Sally, a little white dog, in its cargo area. After months of negotiations, only a desk separates me from my first meeting with that dog.

I shift from foot to foot at the check-in counter as the clerk on the other side stares at a computer screen. I cough into my hand, but her eyes don’t move. I clear my throat and smile. Her brow furrows as she hits keys in rapid succession.

Behind her, a man in an airline uniform bangs through the door carrying three pet carriers. As he drops them on the non-moving conveyor belt, loud meowing emanates from two of them. The other is silent.

The clerk continues her typing and frowning.

She lifts her chin, never taking her eyes off the screen. I lean closer to the counter and cock my head,

trying to see what has her so captivated. She turns it away from me. “Yes?”

“I’m here to pick up my puppy.” I point toward the quiet carrier. “I think she’s in there.”

“What? I guess it would be McDonald.”

Her fingers hit the keys. “We don’t have any information for a Sally McDonald.”

“Oh, no. That’s the dog’s name.”  I chuckle. She doesn’t. I clear my throat and start rambling. “My husband’s favorite movie is When Harry Met Sally. Since we already had a Harry, it only made sense that this puppy would be a Sally.” I smile again. “So I thought you were asking for, never mind.”

She stares at me, her hands poised in space above the keyboard.

She hits a few keys, a ticket spits out of a machine, and she turns to match it to the carriers.

“I think it’s the one not meowing,” I say. She    continues checking the tags, then places the carrier on the counter. The opening is facing away from me.

“Okay, that will be $180.19 for the flight,” she says. I hand her my credit card as I peek through the slits in the carrier.

“Do you think you could turn that around?” I ask. “I’ve never seen her before.”

She nudges the carrier into a half turn with her elbow, and I see a little pinkish-white snout and bright black eyes looking at me.

Sally, our miniature bull terrier, is for my husband, Mike. Five months earlier we had lost nine-year old Harry, our border terrier, to cancer. Harry and Mike had a bond I didn’t understand, because I am not a dog person. As a cat person, I see dogs differently.

Dog tongues are often coated with dirt, drool or even unmentionables, so doggy kisses make me gag. Dogs enjoy getting muddy and dirty. And they don’t groom themselves; they just get muddier. Sometimes they roll in dead or rotting things. They jump, dirtying your pants or ruining your pantyhose. They are loud, and they bark and bark, never knowing when to shut up. They often mistake a litter box for a snack box. And without fail they always need to go outside in the middle of the night during a snow or rainstorm.

It wasn’t that I didn’t love Harry. It just wasn’t the same love Mike had for that little dog. Harry had taken his last breath in Mike’s arms. Though it had been months, I could still see the pain of his death in Mike’s eyes.

I was sad, but Mike grieved. He wept when he walked in the door after work and Harry was not there to greet him. He sat alone in his recliner, leaving the spot next to him, where Harry used to sit, vacant. I tried to warm the place in bed between us where Harry had slept, but it still felt cold.

My heart was heavy with Mike’s grief, and I wanted to find a way to help him through his pain. I broached the idea of a new dog. I thought a dog, not a replacement for Harry, would help Mike.

Tears sprang to his eyes. “Not yet.”

Then a month later he told me about a bull terrier kennel he had found on the internet. Mike had been attracted to the bull terrier breed for years. Me, not so much. In fact, I found them to be ugly! I saw long snouts, beady black eyes, and egg-shaped heads, along with big, muscular bodies. If we were going to get another dog, I was hoping for something small and snuggly. Mike told me these puppies were miniatures, which I thought would help with the small factor. I still couldn’t see a bull terrier as snuggly, even a small one. But the puppy was for Mike, and it was time.

I checked out the puppy photos online. They were pretty cute, but most puppies are, even to non-dog people. I contacted the breeder and asked if the white bully (Mike’s favorite) was a female. She was. And, she was ready for adoption. We were getting a new puppy for Mike!

“Here is your card back,” the clerk says. “And I need a signature.”

I tear my eyes away from the carrier and sign the paperwork. She pushes the carrier toward me, I lift it off the counter and put it on the floor.

As I open the front latch, a little pig-like puppy jumps out. Her short fur is white, barely concealing her pink damp skin. Why are you wet? I think, until I hold her close to my face and smell a distinct sour odor. I hold her away from me. She wiggles and sticks her tiny tongue at my face. I pull back and squint, my eyes assaulted by the scent of puppy pee. She licks the air.

It is early December in Michigan, with a light covering of snow on the ground. Sally has flown in from the warmer weather of Kentucky.

With excitement, I set her down near a tree for her first experience with the cold, white stuff. She tugs at a dead root sticking out of the ground, pulling with great intensity and shaking her little head back and forth. When the ground releases the root, she lands with a thump on her backside. Then she is off, running circles around the tree with the root in her mouth.   I laugh out loud as she runs to me, stopping too late and sliding into my leg. I feel her shiver as I pick her up and tuck her inside my coat. There she snuggles against my body, and into my heart.