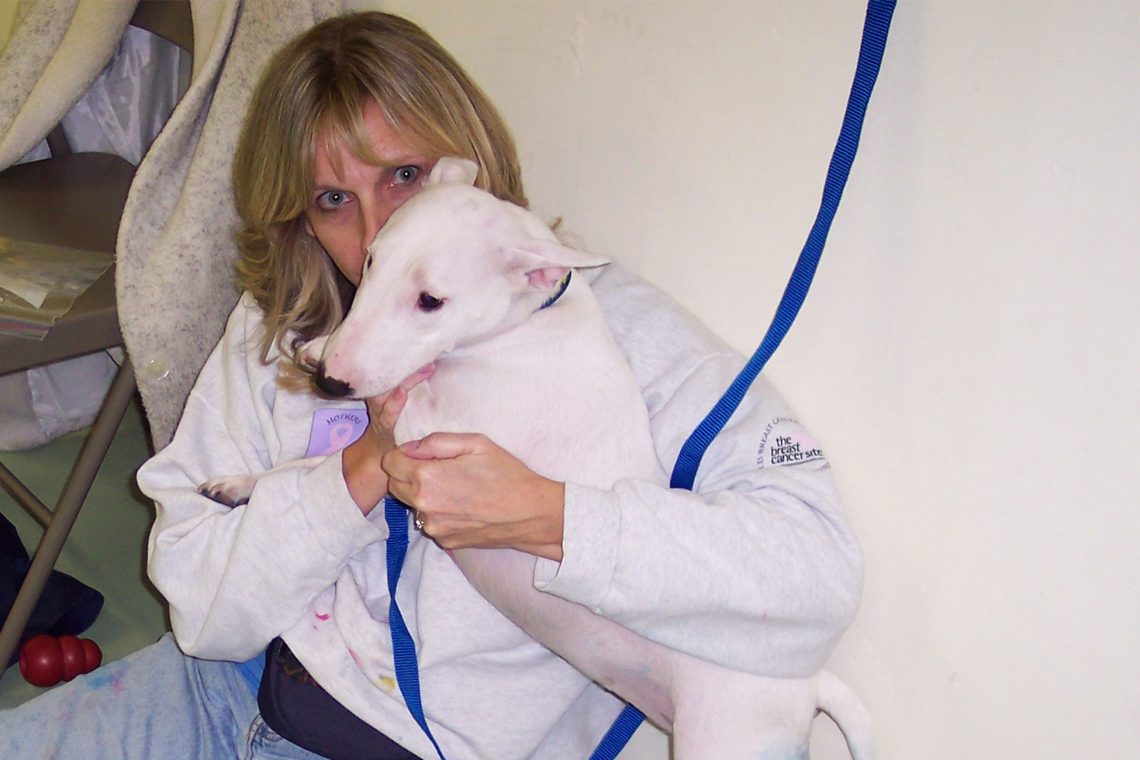 “What should I wear?” I ask my husband.

I toss a pair of jeans on the bed. Casual, won’t show the dirt, but bending in them makes my middle a bit uncomfortable. Now, what to wear with them?  Blouse or shirt? Tucked or un-tucked?  Sweatshirt or sweater?  Dressy or casual? I’m deciding between several ensembles laid out on the bed when my son Jake walks in.

“What’s up?” he asks, munching on a bag of chips. “I’m trying to decide what to wear to puppy class.”

He chuckles and pats me on the shoulder. “You’ll be alright, Mom.”

Once I’m dressed, I help Sally into her dark green knitted sweater. She only has one so there are no fashion decisions to be made.

“Mom, she looks ridiculous in that thing,” Jake says, throwing a toy for her. She runs after it, stops halfway and starts pulling on the sweater string.

“I can’t believe you’ve become one of those people who dress their pets.”

I ignore his sarcasm. “She gets cold outside.”

“Just look at her, she hates it.” He picks her up and pulls the soggy string out of her mouth. “Ugh!” She nips at his nose with her razor-like puppy teeth and he hands her over to me. I bend to put her down and the button on my jeans pops.

We arrive at puppy class two minutes late. Sally has managed to pull her sweater halfway over her head. Hanging over her eyes, she weaves down the sidewalk to the building.

Through the windows I can see the other puppies and owners sitting on chairs along the wall. The owners sit straight, their attire clean and pressed, no strands of hair out of place. I look down and notice a Taco Bell mild sauce stain on my sweatshirt.

The puppies lay at their owners’ feet. There is hardly a movement in the room. The scene freaks me out.

Someone should make a movie out of this and call it Stepford Dogs.

Sally turns to chew on her leash while I try to open the door without dropping the paperwork, the bag of treats and my purse. Meanwhile, Sally’s spit-covered leash is wrapped around and through my legs. Instead of walking into the room, I fall in.

I scramble to my feet. Inside, Carol, the instructor, wearing a small microphone attached to the collar of her starched shirt, greets us. She stands at attention, similar to a Marine drill sergeant, with her hands clasped behind her back. Nodding at me, she glances at the clock, and then the check-in table. I wonder if I can blame Sally if I pee on the floor right now.

I give Carol the paperwork and drag Sally across the room where I collapse on a folding chair. She’s chewing on the leash and tugging against me, shaking her head in a death-grip. Is she growling? I drop my purse and bag of puppy treats next to me, and untangle the leash from around my ankles, again. Sally takes this opportunity to drop her end of the leash and grab the treat bag, pulling it to the floor. I bend to pick it up, the back of the chair tips and I end up on the cold, and I’m sure previously peed on by every type of dog imaginable, cement floor.

The crashing startles the other puppies. The German shepherd starts barking and the golden retriever hides under a chair. Sally doesn’t notice, or care, because her face is buried in a pile of  Snausages.

“Sorry,” I mumble, as I push Sally away from the treats and scoop them back into the bag. I sit down and pick her up, hiding my scarlet face in her soft white neck, wondering whose idea this class was, anyway.

We get through the first lesson without anymore mishaps, and I beam with pride when Sally sits with little prompting. It appears she is a natural at this stuff, and I can tell she is the smartest dog in class, even if she isn’t from Stepford.

The second lesson is the down command. According to Carol, first I have to get Sally to lie down with a treat. Then she gets the treat after she lies down, and finally, I name the behavior (down) and she does it. Since Sally is the smartest dog in class, this should be a breeze.

A tiny problem presents itself— Sally doesn’t lie down. Maybe the floor is too cold, maybe she’s distracted by the other dogs, or maybe she just doesn’t feel like listening to me. Whatever her reason, she refuses to lie down. She sits, she stands, and she spins in a circle. She does every contortion known to man and dog, but she will NOT lie down. So while Carol, who’s obviously trying not to roll her eyes, and the rest of the class member, who are rolling theirs, are moving on to step two, and then step three, I’m still begging Sally to accomplish step one.

Carol senses my frustration and walks over to lend her expertise. Seems she also has better treats, because Sally is happy to stay right next to her. Carol offers her a liver snack and moves her hand to the down position. Sally does an impressive somersault, but no down. Despite repeated attempts, an array of treats, and many, many minutes, Sally refuses.

The first class and my humiliation end and I gather my purse and empty treat bag. I snap the leash back on Sally’s collar and begin to notice the effects of too many treats. Sally is wagging her tail while I wave my hand in front of my nose.

“Just keep working with Sally this week on the down command,” Carol offers. She waves her hand in front of her nose, too.

The golden retriever owner walks past and tells me not to worry, he’s sure Sally will come around, eventually. He looks doubtful, though.

We hurry to the door. The leash tangles around my ankles and down I go.