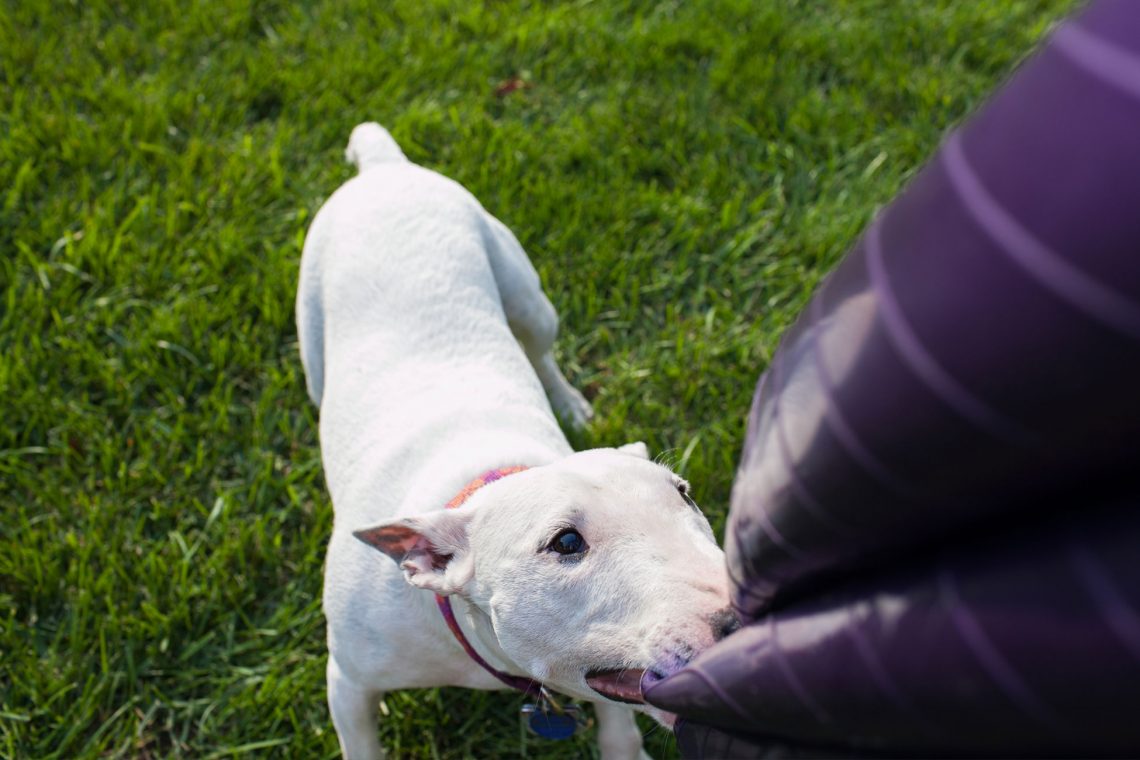 Sally naughty? No way! Maybe a little hard of hearing when she is being called but never naughty. That was my belief until an article titled The 10 Naughtiest Dog Breeds by Kelly Pulley caught my attention. Guess what breed was number two? The bull terrier. Say it isn’t so!! But there it was in black and white—Bull Terrier. I felt a little better by the author’s description of the breed as: “This energetic breed can have trouble with obsessive compulsive disorder, but its sense of humor is what one notices most.”

Sally has a great sense of humor and at least once a day I am laughing at the little white dog. And yes, she does have some trouble with obsessive compulsive disorder on occasion, like when she is staring around the corner at the cat for hours, but naughty?

I continued reading and found the five characteristics of a naughty dog. Let’s see if they fit Miss Sally.

1. Charisma. The author describes it as persuading everyone that you’re doing what they want you to, even though you’re not. Sally seems to spend a lot of time doing what she wants, and we just go along with it. Hmmm—I think that’s a yes for Charisma.

2. Desire to Please. Here it states that naughty dogs want us to approve of their misbehaving. Since most of my articles about Sally revolve around some interesting (could it also be called naughty) Sally behaviors, I’m thinking this is also a check.

4. Sense of (Canine) Humor. Sally wags her tail almost non-stop and when she isn’t wagging it, she’s chasing it. The author states that dogs laugh with their tails. I would say Sally is laughing her butt off.

5. A Sense of (Human) Humor. This is our perception of their behavior. Since I spend a lot of time laughing at Sally’s antics, I would have to say this is another check. And this article is starting to make me think maybe it should be titled The 10 Naughtiest Dog Breed Owners.

At this point, the article moves on to Why Are Some Dogs Naughty? Should I continue reading? After all, we didn’t do so well with the characteristics of a naughty dog.

1. To Get Attention. Really? Sally wants   attention? This little dog has three books written about her for goodness sake. She gets more attention than the humans in the house. Wait, maybe that’s the problem.

2. To Prove a Point. Okay, what point is  Sally trying to make by licking every toad in the yard? Or stalking and (gulp) eating butterflies?

3. To Cheer You Up. The author states that not all dogs have this ability to empathize with humans, but many do. Sally definitely has this ability. If I’m sick, she’s right there beside me, snuggling as close as possible. Of course now that I think about it, she’s snuggling up with me even when I’m not sick. Perhaps she’s just lazy? No way, she is just an expert when it comes to snuggling. I see that as intuitive. She knows what I need, when I need it. Apparently, I need lots of snuggling.

At last we get to The Difference Between “Naughty” and “In the Dog House.”  Uh oh!

1. Degree of Destruction. I don’t see Sally as destructive, unless it is my yoga ball or a new toy and then it is destroyed within seconds. Of course maybe one of the toads soaked in Sally spit might see this differently.

2. Degree of Inconvenience. Sally can be annoying, not so much inconvenient. Although when she is ignoring me when I am telling her to stop eating something outside and then she comes into the house and pukes on the carpeting, that is bordering on inconvenient.

3. Degree of Danger. The only real danger is to butterflies and they seem to have learned not to land close to the little white dog’s face, no matter how still she is standing. So all in all, I would have to say that Sally is borderline naughty and most of that behavior happens in the summer months when we are outside. We get a reprieve in the winter due to her willingness to disobey when we want her to go outside in the snow. But who could blame her for that? Not me. And if I ever see an article titled The 10 Naughtiest Dog Breed Owners, I’m  ignoring it.

The Sally Squad: Chapter One