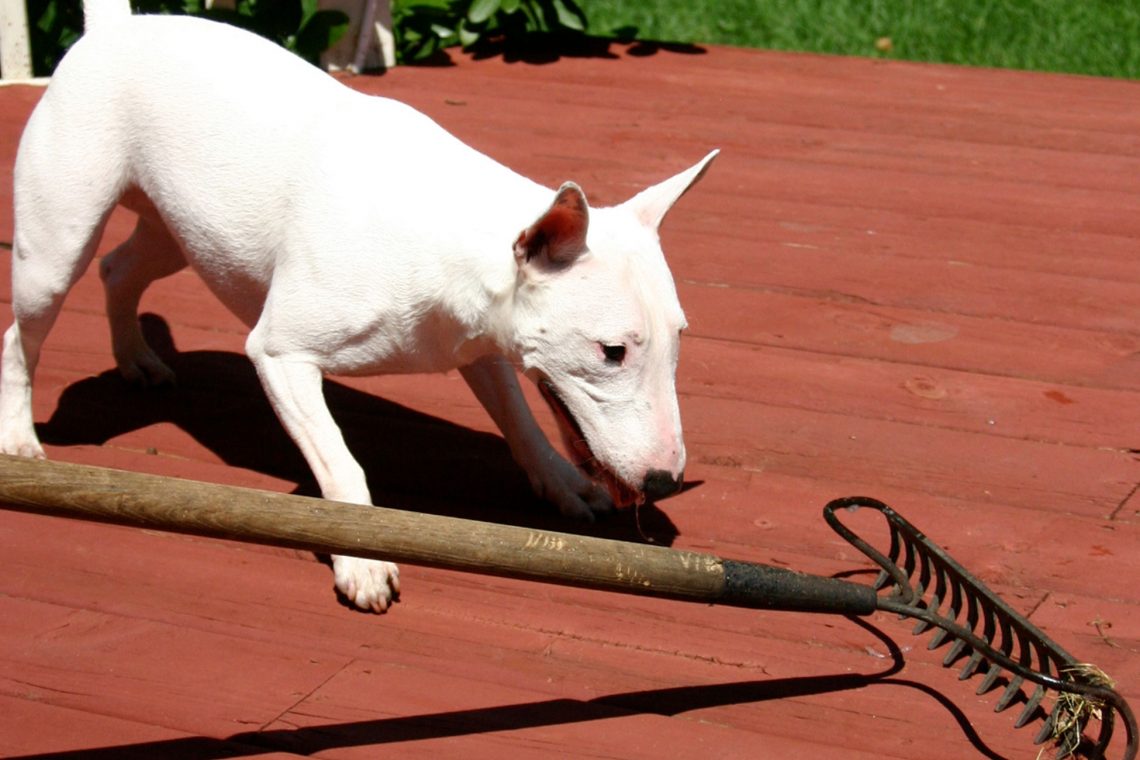 I grab the door handle of the veterinary exam room, bolt to my car and call Mike.

“I just left her with the dental vet.”  My voice catches.

“I had to leave her there,” I cry.  “And she watched me walk out of the room and her eyes looked so sad.” I feel lightheaded and take a deep breath.

“I know, but she looked so scared and I just left her.”  I sniffle.

“What did the vet say about her?”

“They are going to anesthetize her enough to check out her teeth, then he’s going to call me.”

“Call me when you hear something.”

I drive in a daze to my office and keep busy while waiting for the phone to ring.  After what seems like an eternity, but is only an hour, Dr. Moore calls. He’s the doggy dental specialist at Harborfront Hospital for Animals.

“Sally has malocclusion degeneration,” he says.

He continues with an explanation that sounds like a medical textbook. Sally’s jaw is out of line and that caused the upper and lower canines to rub together. They have probably been like that her whole life, all five years.

Sally doesn’t have an abscessed tooth (as her regular vet thought), but the teeth rubbing together has caused a hole to form in her gum.  The teeth also rubbed some of the bone away.  The more he talks, the more I wince.

After several minutes of medical gobble gook, Dr. Moore explains the options for correcting the problem in layman’s terms.  One option even includes braces.  Is Sally going to wear a retainer?  Dr. Moore thinks Sally is a little old for braces.  After we review the options, I ask what he would do with his dog in this situation.  And that is what we chose.

We discuss the cost—yikes!—and I gave him my approval to go ahead.

“Sally update,” he says instead of hello.

“Yeah, but she has a malocclusion degeneration.”

“That’s what I said.”  I repeat most of what Dr. Moore told me, along with the plan of action and the cost.

“Call me when you hear back from the doctor.  And don’t worry, she’s going to be okay.”

Later that afternoon, Dr. Moore calls to say everything is done and Sally is fine.  I breathe a BIG sigh of relief, one I didn’t realize I had been holding all day.

“She is doing well.” I lean back in my chair.  “Dr. Moore said there were no surprises and everything went the way he expected. “

I hear Mike let out a sigh.

“Call me when you get her.”

When I show up at the dental vet office later that afternoon, I am again greeted with smiles and reassurances from the staff.

“Sally is so sweet.”

“Sally is such a good dog.”

Dr. Moore shows me photos of Sally’s mouth and teeth.  They look awful.

“See,” Dr. Moore says, pointing. “Here is where the bone has been rubbed off.”

He points to the place where he performed a coronal reduction. My eyes must have crossed so he takes out a fake dog mouth thingy and shows me how the canines were rubbing against each other, and how they won’t anymore.

“Do you think this was causing her any pain?”

Bad doggy mom guilt sucks me up like a vacuum cleaner and I feel my shoulders droop.  How can this be? Sally has been in all this pain and we didn’t know?   I can almost hear the Animal Protective Services revving their motors as they tear toward my house, handcuffs at the ready.

“Oh sure, she’s right over there.”

Across the room, Sally is listing to one side in one of the kennels.

I scoop her into my arms.  I nuzzle her neck and shower her face with kisses.  She nestles into me, as much as a muscular twenty-five pound dog can nestle, and I feel better.

As I head toward the door, several technicians reach out to scratch Sally’s head and talk to her.  In the car, I strap her into her purple harness.  She curls into the seat and rests her head on the arm rest.

“Good news and bad news,” I say.  “Good news, she’s a little woozy, but otherwise she seems to be doing fine.”  I scratch her ear and she closes her eyes.

“The vet says no more dragging the garden rake around the yard.”