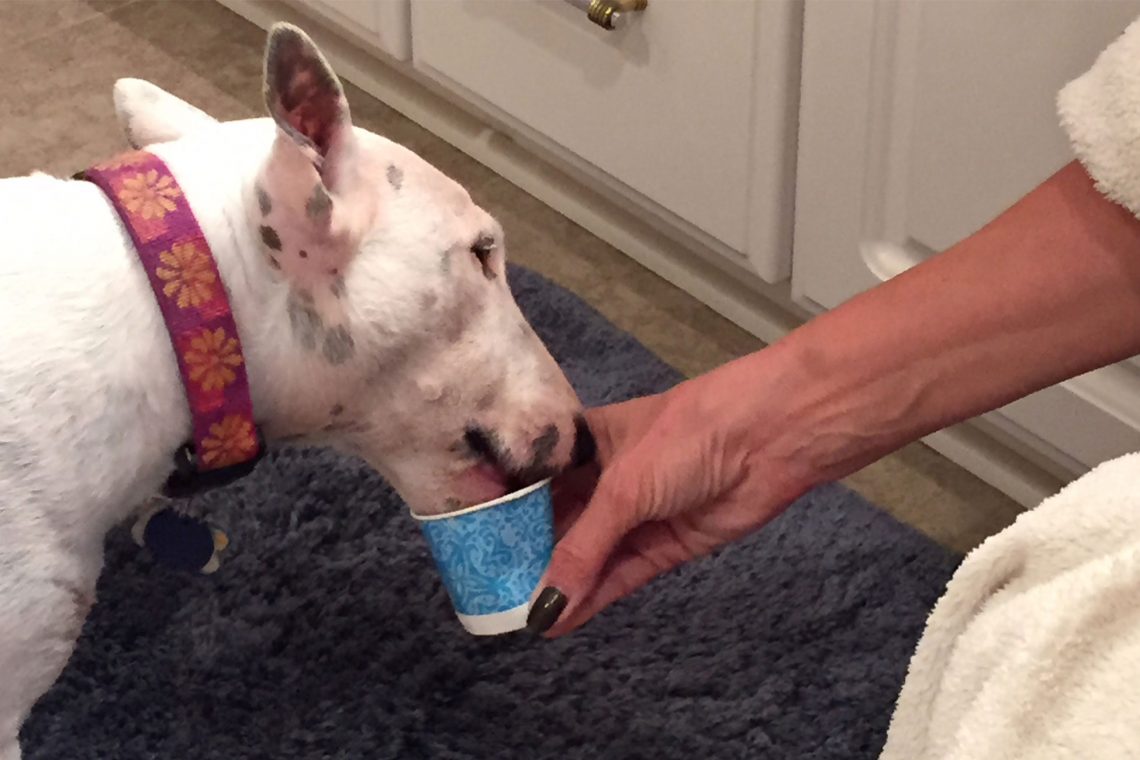 Sally has some interesting idiosyncrasies—to say the least. She won’t eat out of a bowl, and her food has to be poured out in a relatively straight line on a place mat. It is located in the laundry room/bathroom off the kitchen, and on some days it is necessary for someone (me) to be in the room with her while she eats. Otherwise she just follows me around the house and Eli takes this opportunity to run in and eat her food.

She also does not care for uncarpeted floors. This became evident when she was in her first puppy class. That floor was cement for obvious cleaning benefits, and Sally refused to get into the “down” position. It took the trainer and me a multitude of tries before we realized it was because she did not want her belly touching the cold floor. We put a rug in front of her and she did a perfect “down” for us. In our house, most of the floors are not carpeted so Sally runs from rug to rug—even if that means taking the extra long way around the room.

Knowing her penchant for peculiarity, I should be more cautious when I try something new with Sally, but sometimes I forget.

One evening I was in the bathroom getting ready for bed. I changed into my pajamas, washed my face, brushed my teeth and used a paper Dixie cup for a glass of water. That’s when I noticed Sally standing on the bathroom rug and staring up at me. Normally she is only in the bathroom when I get out of the shower so she can lick my wet legs—another unconventional behavior. Therefore, I was curious as to what she wanted. She seemed to be staring at the cup in my hand so I filled it with water and held it down for her. She lapped at the water and just like that, a new Sally habit was born.

Every night after that was a similar routine—pajamas, wash face, brush teeth, and drink for Sally. She was a messy drinker so I always held the cup over the rug to keep the floor dry, and then stepped in that wet spot when I woke in the middle of the night for a trip to the toilet. Even so, it was a silly little thing that I didn’t give much thought to until I noticed that every time I went into the bathroom, Sally followed me in and waited for a drink. She had replaced her water bowl with hand-delivered water. It was a new idiosyncrasy for the little white dog.

On one occasion, I was bent over giving Sally her nightly drink when Mike walked in. I quickly squashed the cup in my hand, spilling water on my feet, and walked nonchalantly to the waste basket.

“What were you just doing?” he asked, as he watched Sally licking my toes.

“Huh? Just getting ready for bed. Why?”

“Don’t tell me you were giving Sally water out of a cup.”

I fake laughed, but avoided answering him. He raised his eyebrow (I hate it when he does that), as I walked past and left the room.

After that I listened to see where he was in the house before I gave Sally her drink, but a couple days later, he busted me in the act again.

“Seriously?” He gave me a head tilt.

“What’s the big deal?” I said. “It’s just a cute little moment we share together.”

“Mm hmm,” he said, giving me a sympathetic look.

I made a face at him once he left the room.

After that I didn’t even worry about him walking in and Sally’s cup drinking continued. There were many occasions when I wondered why I had ever started this ridiculous routine, but for the most part it was just a new Sally quirk.

Then it happened. I walked into the bathroom and Mike was standing there with a Dixie cup in his hand and a guilty look on his face. In front of him on the rug were Sally … and Eli.

“Eli, too?” I asked. Mike nodded as he bent over and held the cup out for Eli, who lapped at it without spilling a drop.

Next Post
A Day in the Life of Sally