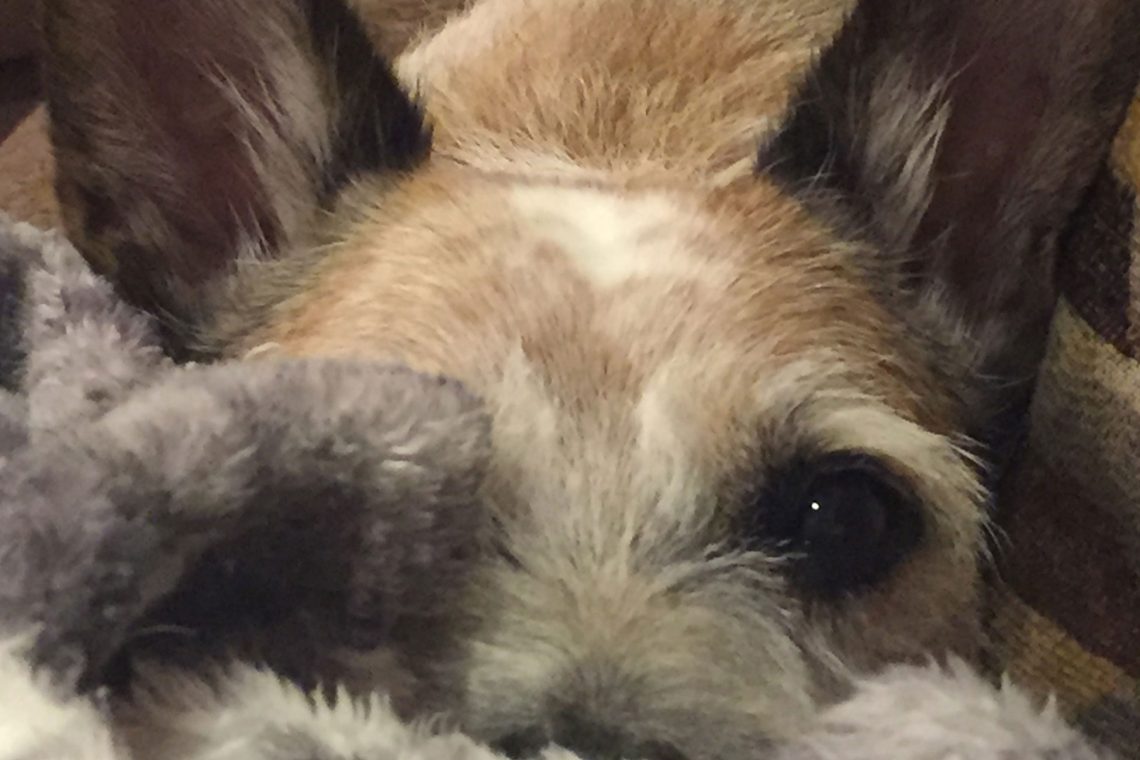 The sound of paper ripping makes me pause as I brush my teeth.  I cock my head toward the bathroom door.  What is that?

My mind goes over the items in my bedroom in rapid fire … bed, blanket, rug, fan, pillows, paperback book on bedside table … oh no!  I spit, throw my toothbrush on the counter and rush to Eli’s kennel.  Sure enough.  He gives me his guilty who me? Look, and there is something peeking out from behind him.  My new book, minus the cover, which I find tucked between his front paws.

Bright light bursts into the room and a rumble of thunder follows.  Eli explodes from his kennel and runs into the kitchen, around the table and back into the bedroom.  His eyes are frantic as he scans the room.  His terror is palpable.

I climb into bed and pat the blanket beside me.  He takes one leap and lands, trembling, yet sitting erect.  I rub his ears and pull him in close to me.  “It’s okay, Eli,” I whisper.  He lays on his side, but stays alert.

I climb into bed and pat the blanket beside me.  He takes one leap and lands, trembling, yet sitting erect.  I rub his ears and pull him in close to me.  “It’s okay, Eli,” I whisper.  He lays on his side, but stays alert.

I think back to the weather forecast I heard earlier in the day. .. thunderstorms all night.  This is going to be a long night.  I reach around Eli with the hand that isn’t patting him and turn off the light.  I curl on my side, wrapping him into me with both arms and his body relaxes.

Mike is gone for the night so it’s just me and the doggies. Sally jumps up on the other side of the bed, then scootches under the covers and drops against me with a thud.  I’m wedged between two dogs and can’t move.  Did I say it was going to be a long night?

As I start to doze off, more lightning flashes.  Not good.  Little Eli’s body tenses and I whisper my mantra of “it’s okay,” over and over.  I rub his side and pull him even closer.  As the thunder rumbles and the window panes shake, he burrows into me, but he’s not trembling.  It’s working!   I relax a bit.  Then Sally pops her head out from under the covers.

I have rolled to my back by this time and she crawls across my stomach and stops.  Her head and front legs are on one side of my body and her back legs on the other.  And she is no lightweight.  I am about to push her off when I see her stretch in the direction of Eli and stretch her head toward him. I wait for her to bite his ear because that is how they play, but she doesn’t.  With a subtle, quiet movement she rests her chin on the top of his head.  Awwwwwwwwww!

I’m surprised by her gentleness and want us to stay like this, but my stomach is really starting to hurt from Sally’s bony, heavy body.  I’m going to have to move her, even though I don’t want to disturb this moment of extreme cuteness.  A sudden flash of lightning does it for me.

Sally scrambles backward off my body. Eli leaps from the bed. Sally chases after him as he runs out of the room and into the kitchen.  I follow their movements by the sound of their paws scrabbling against the floor.  Mary jumps up from her pillow and stumbles to the door just as the other two run back in.  There is a mini collision as the three dogs fall into and around each other.  More thunder rumbles and Eli runs into the closet, Sally following close behind. She’s trying to bite his ear.  This is nuts!

I get up and gather Sally and Eli back into my bed.  I call Mary and she drops onto her pillow.  My doggy bookends snuggle into me and once again I start to drift off—until I hear an odd sound.  What is that chewing noise?  I listen closely, sigh and reach around to Eli’s mouth.

“Drop it,” I say and he spits out a gob of my paperback.

No images found!
Try some other hashtag or username