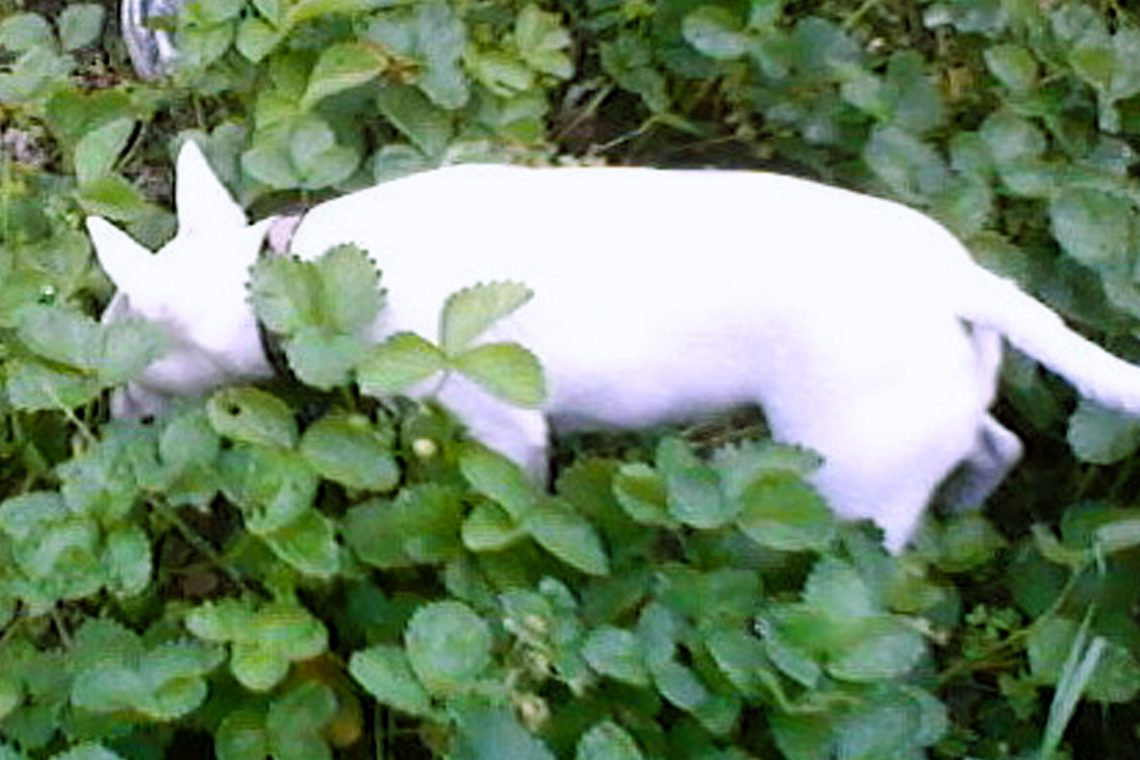 Mike and I moved in May and as we were walking around the property, we noticed a strawberry patch … a large strawberry patch. Not too long after our discovery, it was covered with white flowers, and after that lots and lots of green berries.

Today as I look out the window, I spot a few ripe red strawberries. I grab a bowl and head to the patch with three doggies following along. I swat at a couple mosquitoes and the closer we get, the thicker the swarm surrounding me grows. I look down and my legs are peppered with their dark, flighty, stinging bodies.

“Aaaaaaaahhhhhhhhh,” I scream as I run back to the garage. I grab the nearest can of bug spray and douse every inch of bare skin, then give a quick spray to my clothes, just in case. My entourage and I venture forth again.

Mary leads the way and once inside the fenced area, she digs up a dirt patch and curls into it. Eli and Sally walk right into the strawberries. I start picking at one end. After several minutes, I stand to stretch my back.

Strawberry plants are flying behind Eli as he digs a hole in the patch.

Sally has her face buried in the leaves searching for toads. At least I think she is toad hunting until she lifts her head and I spot the stem of a strawberry hanging out of her mouth. I laugh as she dips her head back in and I hear chomping.

I continue picking and soon she is alongside me munching away. I chuckle until I look down and see a tan spider the size of Florida on her back. Its legs are about 10 feet long and its body is hairy and scary. Sally gazes at me with that silly grin of hers. I flinch as I brush my hand at the monster hitching a ride on her back, but I miss. I’m not sure how I miss something that huge, but I do.

“Eeeeeeeeee, Sally,” I say. I jump backwards as I slap at the gargantuan beast and it flies away from me. I shudder and put on my garden gloves before I continue picking.

A few days later, my friend, Janet, comes over. I don’t tell her about the spider but I do offer her a pair of gloves. She has brought her own so maybe she is aware of the danger lurking.

“Sally likes to eat the strawberries,” I say as we start picking. I grab a large, juicy, perfect strawberry. “Look at this one.” I turn it around and find a big bite taken out of it. “Wonder who did this?” I look at the little white dog who is neck deep in the plants.

My back is to Janet as we move around the berry patch.

“Hey Sally, that’s mine,” Janet says. I turn and see a face-off as Sally and Janet head toward the same berry.

Janet grabs Sally’s ball and throws is across the yard. Sally ignores it and continues strawberry hunting.

My sister, Joyce, shows up and starts filling her pint containers.

“I turned around and Sally had her nose in my container,” she says. “I reached for the bowl and she grabbed a berry and took off.”

Sally is stretched out in the berries, giving us her best innocent look. The red around her mouth is a dead giveaway though. Our picking continues.

“Now what?” I ask. Sally is standing in front of her.

“She snatched that berry right out of my hand.”

Later that evening I am on the couch with Sally burrowed in beside me when Joyce calls.

“Thanks for the strawberries,” she says. “And thanks to Sally I found another partially eaten one in my bowl.”

“Picking strawberries must be exhausting for her, because she is sacked out beside me right now. She’s really cute, except for the smell emanating from her.”

“Must be the strawberries. Lucky you.” I hold my breath and fan the air over Sally’s rear. “Yeah, lucky me.”