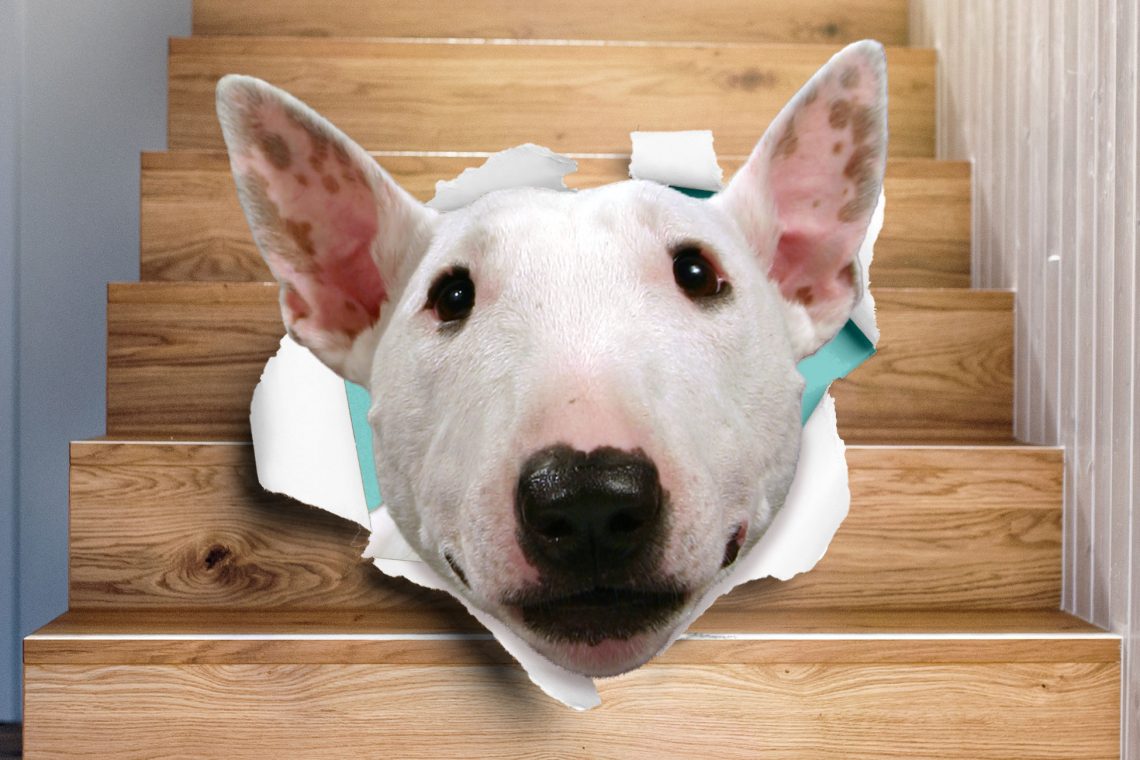 “What’s the matter with Sally?” Jake asks me.

“She won’t come up the stairs.”

Our home is a bi-level, with our living area on the main floor. The lower level is our family room, my office, etc. The stairs are all open and you go down eight stairs to a landing, then turn to the left and go down another four stairs.

Sally is half-way down (or up, depending on your viewpoint) the main set of stairs and looking up at us. “Come on, Sal,” I say.

She turns and goes down the stairs to the landing.  There she turns around and starts running up again.  Halfway up, she stops.

“You can’t block the top of the stairs,” I say to Jake.

“Yeah, but she gets a running start and has to make it up all in one smooth move.  If she has to stop, she turns around, goes back down and has to start all over again.”

Jake gives me a look that tells me he thinks I’m nuts, and then moves to the side.

She goes back down to the landing, turns and starts back up again, then stops about three steps from the top.

I look around the landing.  “That’s the problem,” I say.  I grab a bag that is hanging on the stair rail and move it to the kitchen with Jake following behind me.

“She has her idiosyncrasies.”  There is the sound of Sally’s nails as they click, click, and click back down the stairs. “Just stay here where she can’t see us,” I whisper.

We stand still and within a few minutes I hear Sally as she makes her way up the stairs, one step at a time.  Jake starts toward the stairway, but I hold up my hand in a stop motion.

“Wait until we hear her at the top,” I whisper. “Otherwise, she’ll start all over again”

“This is ridiculous,” he says, as he shakes his head.

I peek around the corner just in time to see Sally reach the top step. She glances at me and stops.  “Arrggghhh!”

“Come on Sally, let’s go,” Jake says as he walks past me. She turns and trips down the stairs, with him following close behind.  On the landing, she stops and he picks her up.  Carrying her to the top of the stairs, he sets her down on the hardwood floor where her paws start sliding.

“You need to put her down on the rug,” I say.  “Otherwise she gets too freaked out.”

Jake raises his eyebrow at me.  I’ve always wanted to be able to raise just one eyebrow at a time, but have never been able to master that feat.  Jake is good at it and right now, his skill is irritating me.

At that moment, Mike pulls into the driveway and Eli runs past Sally and to the door.  Sally tries to run, her paws slip on the floor, and she heads down the stairs again. She stops at the landing and looks up at us.

“That’s it,” Jake says as he walks away.

Mike enters the backdoor and Eli greets him with a fanfare of jumping, barking and licking.

“She has an issue with the stairs,” Jake says.

Mike tries to raise an eyebrow, or at least that’s what it looks like to me.

“She has a little OCD with regard to coming up the stairs,” I say. “If she can’t make it all in one run, then she will go back down.”

Sally’s barking interrupts our conversation and we all move to the stairway and look down.

She stands on the bottom landing with one paw on the step, looking up at us.

Mike and Jake walk away.